A Visit to Dickinson's Reach 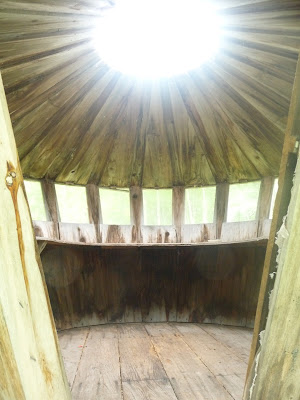 In 1981 my parents went on a camping trip in Nova Scotia, Canada.  My father had a copy of Drew Langsner's book "Country Woodcraft" and a fellow by the name of William Coperthwaite wrote the forward for the book.  There was an address at the end of the forward that was simply labeled The Yurt Foundation in Bucks Harbor, Maine.  He didn't know what a yurt was but he saw on a map that Bucks Harbor was not far out of the way, so they drove to the small town and went to the post office because they did not have an address.  They were given simple instructions to park by an old building in a gravel lot and follow the pathway.  After a mile and a half hike through the woods they came upon a 3 story yurt and arrived at Dickinson's Reach.  Coperthwaite was hauling two buckets with an old yolk, moving seaweed from the shoreline to his garden beds...

A few years ago, my Dad was flipping through a book by Lloyd Kahn entitled, "Homework," and he saw photos of some of Coperthwaite's yurts.  He shared them with me and I remembered his tale and the striking images of the round structures.

A few months ago, I questioned SunRay Kelley about his lap cedar roofing and sheathing technique.  I wanted to know where he had seen it first.  The name William Coperthwaite popped up again. This time I bought his book, "A Handmade Life" and then Peter Forbes and Helen Whybrow's book "A Man Apart:  Bill Copperthwaite's Radical Experiment in Living."

I proceeded to learn about an academic who was making his words a reality.  William Coperthwaite was a living manifestation of Emily Dickinson's poetry.  Philosophy was as much apart of his structures as cedar and pine.

A few weeks ago, I asked my dad to meet me in Maine and visit Dickinson's Reach again.  We used the guiding principles of Bill Coperthwaite's words and made the journey to the remote coastline of Northern Maine.   Here are some photos of our adventure... William Coperthwaite's home, the Library Yurt.  When my mother and father visited it was only three stories, but Bill was already talking about raising the yurt and building a 4th level.  Sure enough, with three jacks he was able to lift the house with all his stuff inside!  His mugs were on his counter top.  When questioned about how he did it he would say,  "really slow." 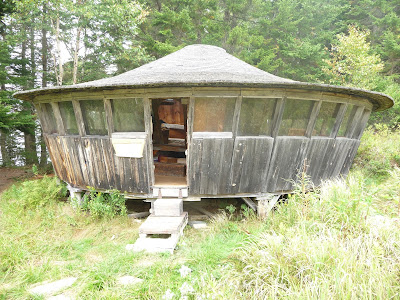 The Guest Yurt:  This is where we stayed for our visit. 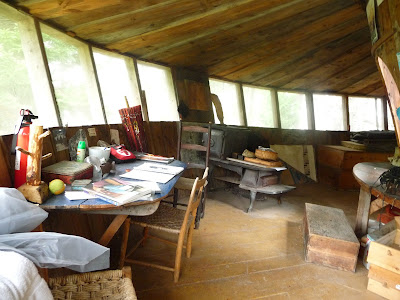 There was an outer ring... 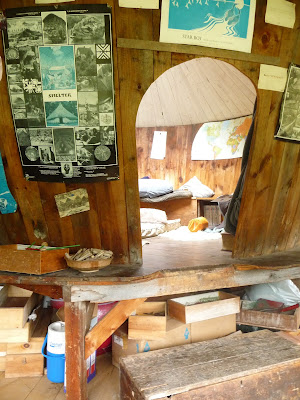 and an inner yurt... 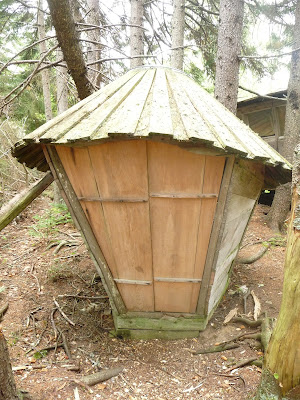 There were several outhouse yurts on our adventure.  These little structures made me so happy.  They are intrinsically beautiful, with amazing natural light and after spending the last year living with a composting toilet I have really learned to appreciate the change from the hard, white, reflective surfaces of modern bathrooms to the rustic, wooden and natural ambiance of the outhouse.  There will certainly be an outhouse yurt popping up near the Leafspring soon... 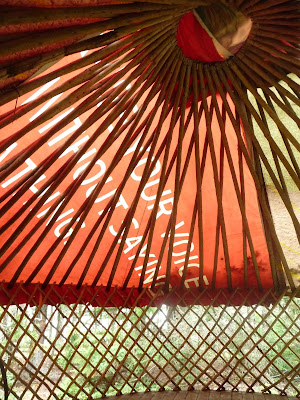 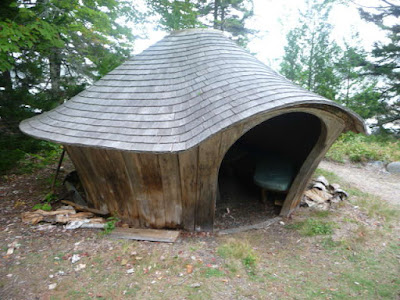 The outdoor kitchen dining yurt.  My dad and I spent a lot of time analyzing this little building.  Its natural curves are amazing.  Not only are the walls canted at an angle, but they are curved.  It took us a while to discover how it was done, but he ripped the curve on a wide board with a band saw and then nailed together the flat sides of the two pieces left from the curved rip cut.  More info about it is written on page 112 of "A Handmade Life." 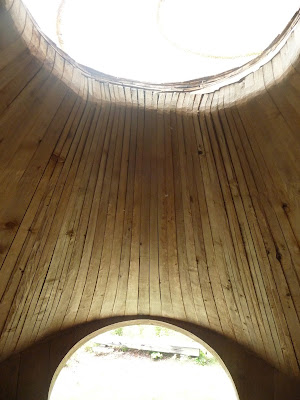 This building was definitely the most complicated and intricate building we saw.  My Dad remembered it was there when he visited in 1981. 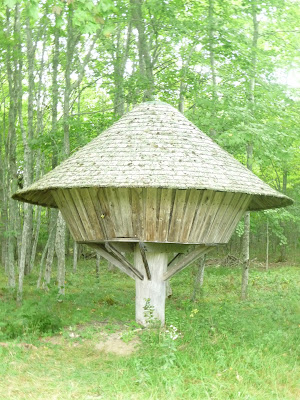 A food cache and storage yurt on a post... 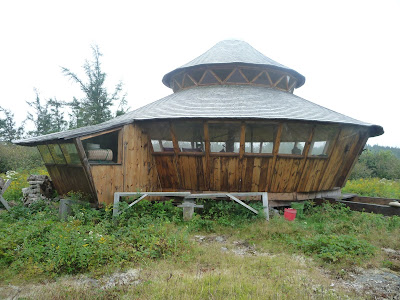 Across Mill Pond is Peter Forbes and Helen Whybrow's yurt.  After reading the book we had to try to find the building, so we spent a few days scouting and looking for it, we found the bell described in the book and eventually made it to the building site. 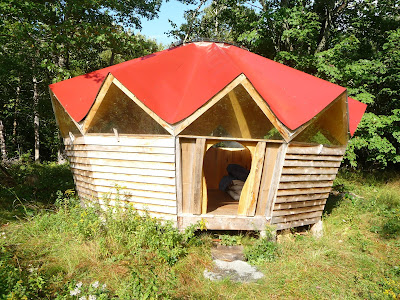 The last yurt that Bill worked. He tried out his "tortured plywood" technique on this one.  One of the few yurts that used plywood.  It was constructed for a caretaker to live when Bill got old, but unfortunately he died tragically in a car accident 3 years ago at the age of 83. 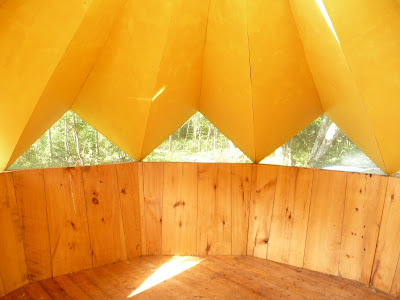 Amazing natural light on the interior.  There was a grouse trapped in this yurt one morning that I freed and it left me a single, beautiful feather. 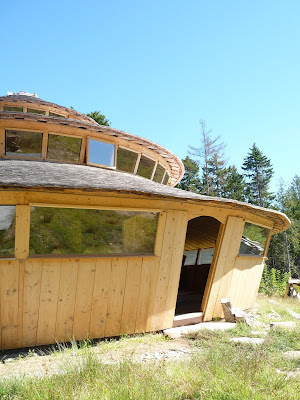 After a few days we packed up, cleaned up any garbage we found, emptied the composting toilets and even chopped down a tree that was precariously hanging over an outhouse yurt.  We traveled to Melanie and Josh's project  a few hours south and visited one of the last yurts that Bill designed.  It was still under construction so it was a great time for us to see the details and ask questions... 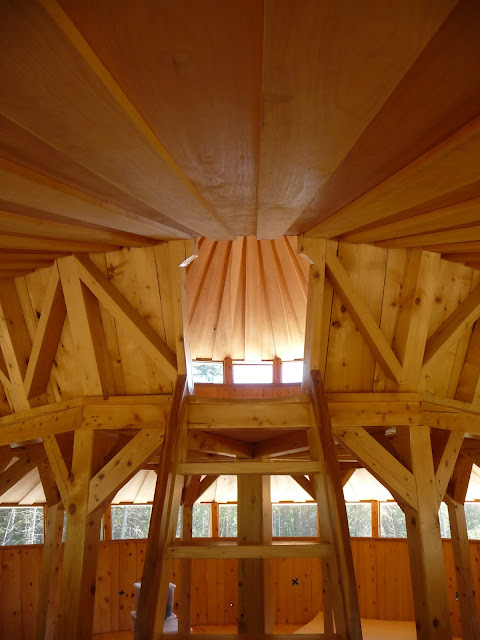 This was the ladder to the third story loft and one of the best photos I took on the trip.  Josh had a woodmeizer mill and had milled a lot of the lumber for the project on site. 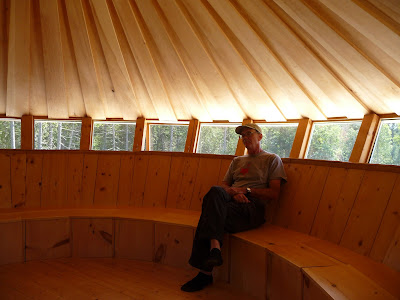 Here is my dad in the third story loft.  It was an open conference style room with bench storage and a great view. 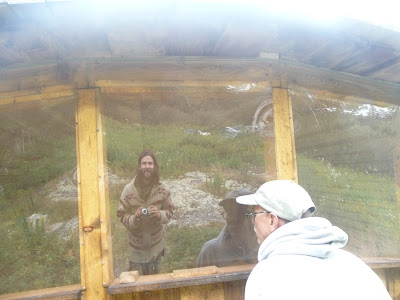 An absolutely amazing trip.  It was perfectly timed in the middle of my project and now I am back on my building site, sheeting my first concentric yurt project that I am taking on myself.  I did not use Coperthwaite's designs, but his influence is unmistakable.  Check out www.insearchofsimplicity.net for more info on Bill. I return humbled and inspired...

"Not knowing when the dawn will come
I open every door;
Or has it feathers like a bird,
Or billows like a shore?"

Posted by Pairoducks at 9:25 AM