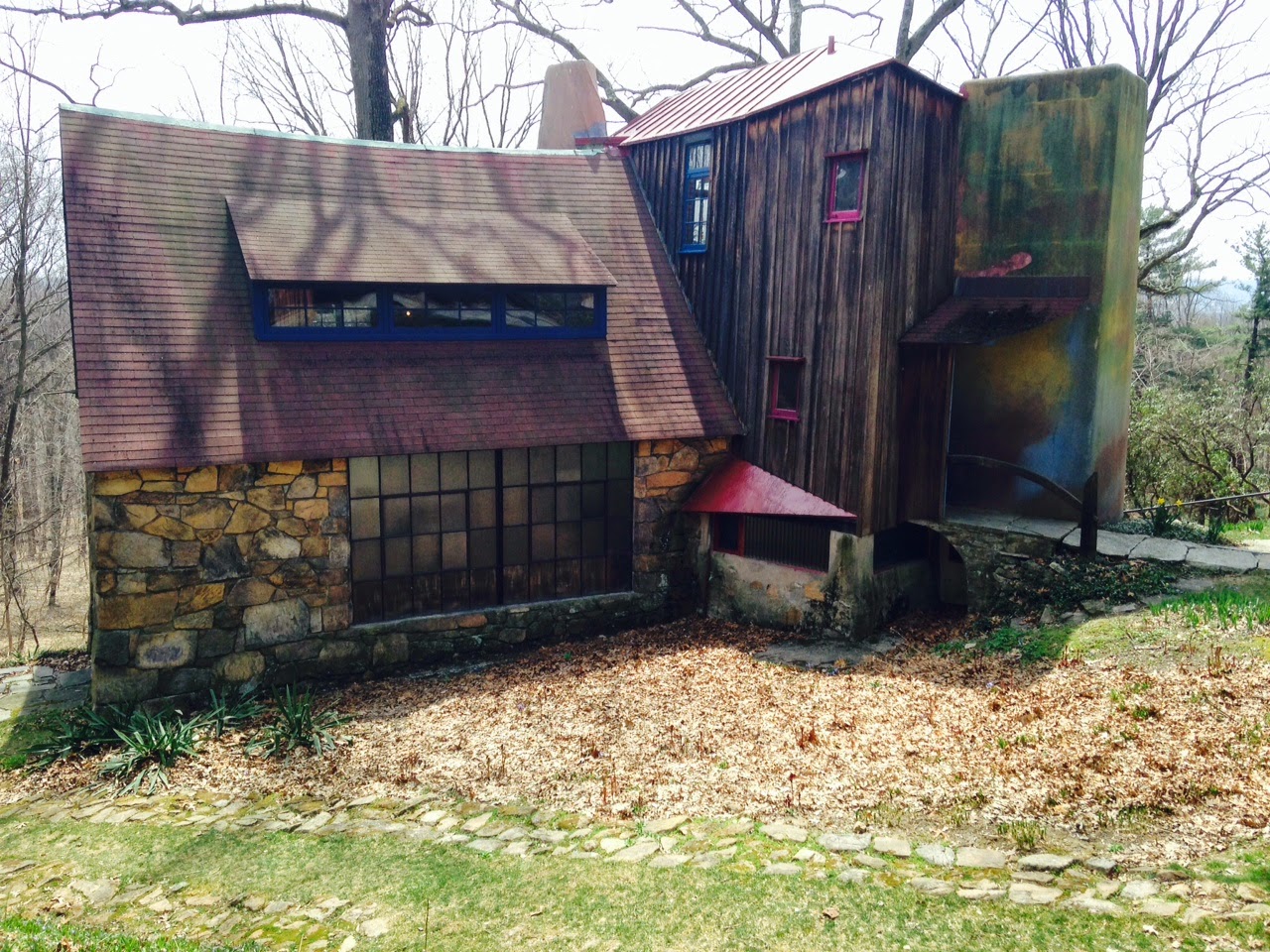 While visiting my parents in Maryland, my dad had the wonderful idea to schedule a tour of Wharton Esherick's home and furniture/sculpture studio in Paoli, PA, outside of Philidelphia.  His home has been turned into a museum and tours can be scheduled from the link provided.  If you are interested in wood sculpture and you live close by Philidelphia or are in the area, I highly recommend a visit.  No photos were allowed inside this treasure, but check out his work via the museum website or a simple google image search. The photos I have provided are of the exterior which does not represent his work

Wharton was alive from 1898 to 1970 and he was a wild and crazy artist.  He lived in the hills outside of Phili because it was all he and his wife at the time could afford.  After studying drawing, print making and painting at various institutions of art, he dropped out of the Pennsylvania Academy of Fine Art 6 weeks before graduation because he had not found his own style.  On a trip with his wife he bought his first set of wood tools and found his medium.  He carved frames for his paintings and then moved to block prints.  He progressed to furniture and functional sculpture and sculpture alone.

I have never seen so much amazing work in one place and I felt like I was walking in to my own dreams.  The organic forms, as well as simplicity in design resonates with the philosophy of my own process.  His connection with the material has inspired and influenced me more than any sculptor I have ever seen.  I believe the work of Wharton Esherick should be shared with people who are interested in this blog.  His life is poetry in motion, his process is at the core what I seek to emulate.  A special thanks to Wharton Esherick for being a nut. 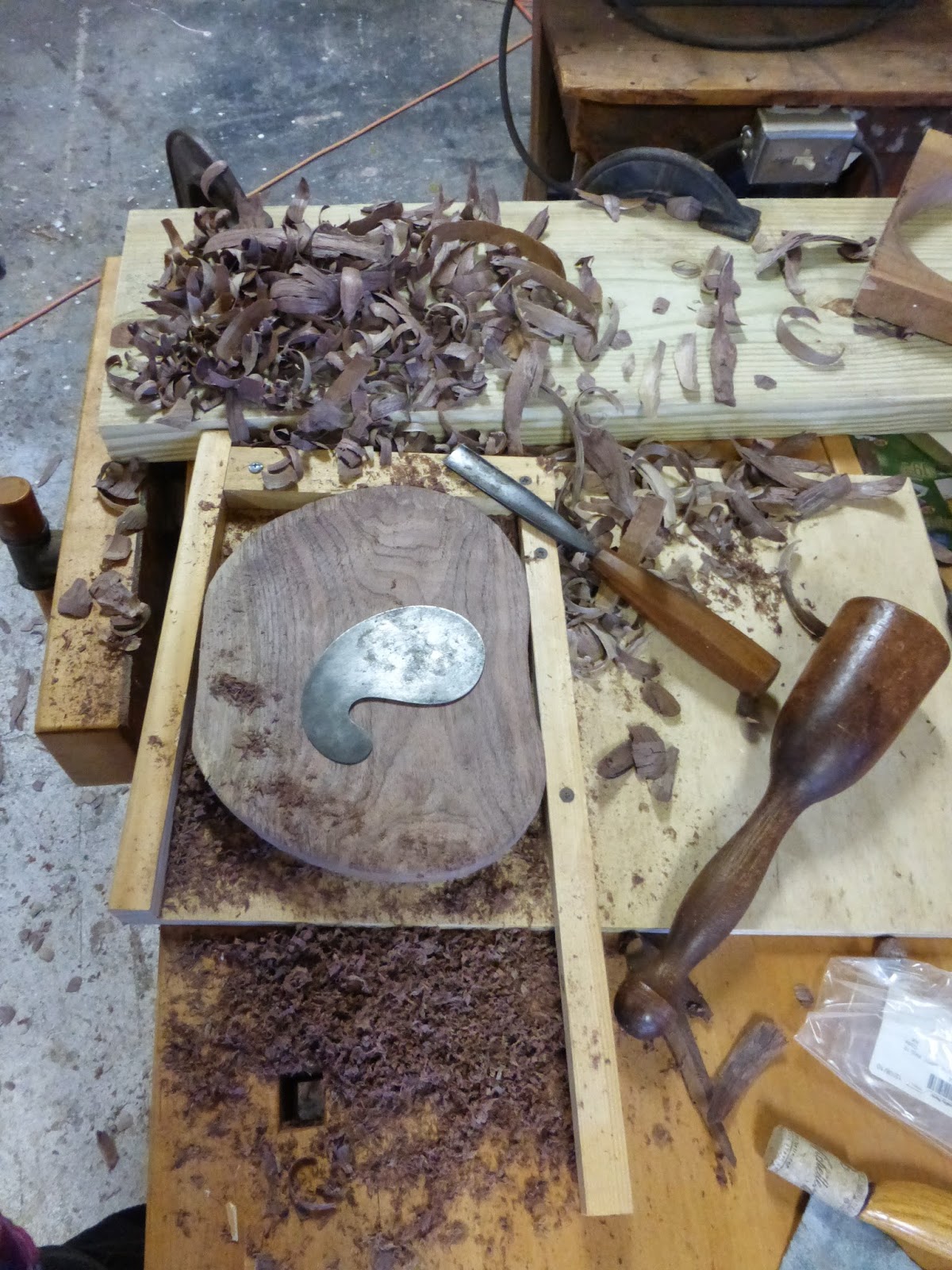 Upon returning home, my dad and I had a few days to spend in his workshop.  I decided to use Black Walnut, one of Esherick's most commonly used wood for sculpture, as well as my dad's, and make two stool seats for the trailer that were a similar style as the stools we saw in Esherick's home.  I was able to use my Great Grandfather's gouges and mallet, along with my dad's tools and workbench to carve the seats.

I started by drawing some organic shapes on the wood and rough cutting the shape with a band saw.  Next I used a gouge and a mallet to take away the majority of the material.  Finally I scraped the seat top smooth with the paisley shaped metal scraper pictured above.

While working, my dad offered lots of great advice.  First he suggested using an angle grinder with a sanding disc on it, instead of a gouge.  I did not take this piece of advice because I like using hand tools.  As I was working I was thinking about process and why I did not want to "save time" with the grinder.  Carving is a process for me and using the angle grinder really takes away from the enjoyment of the process.  You have to use ear phones and eye protection, and you make a lot of fine particulate matter dust, so it's best to wear a respirator.  When I was working I was listening and singing Fleetwood Mac's Pious Bird of Good Omen, the Rolling Stones, the Grateful Dead and having a good old time.  I would not have even heard the music if I was using the grinder.  I talked to my dad about why I didn't want to use the grinder and he agreed.  I thought it was a really important philosophy of craftsmanship and one that I have not explained in detail.

Frequently I write that I only used one or two tools on this piece.  I could sculpt with just and angle grinder and it would still be sculpting with only one tool, however the precision and process of hand tools makes the artwork different.  It takes longer and just as I was discussing in the After Shower Shake post, the time it takes allows for comprehension and discovery that does not happen with power tools due to their speed.  I'm not sure how to put it better than something is lost.  It took me a couple hours to make each stool seat, but I truly cherish the time I got to spend with my dad doing what we both love.  I am tearing up sitting in an airport terminal.  I will continue to be a broke romantic and it is in the spirit of Wharton Esherick that every single piece of art that I create will hold this emotional inertia and responsibility of craftsmanship.