Framing the Walls and Roof 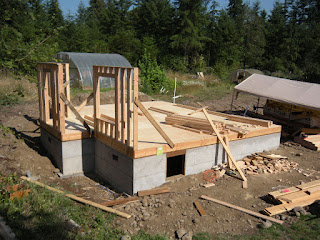 For the first day of framing I hunkered down on the chop saw and cut all the 8 ft 2x6s down to 92 5/8" for the studs.  I made a big pile the studs, while Shon began layout. 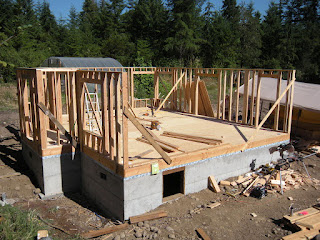 With Wes back on our second day we got most of the walls completed.  Wes worked on a framing crew in Alabama for a number of years so he is quick on his feet.  Once we finished framing the walls and sheeting them with plywood we called for our roof trusses to be delivered.  The trusses were engineered and built by Truss Components located in Tumwater, Washington. 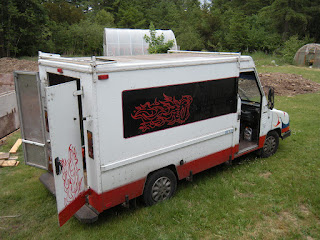 Our ambitions were quite high on the day of truss delivery, however our faithful mule gave out on the way to work.  Shon unfortunately had to have the the truck toed to a mechanic.  We drove my car to the job site, just in time for a little preparation before the trusses were delivered. 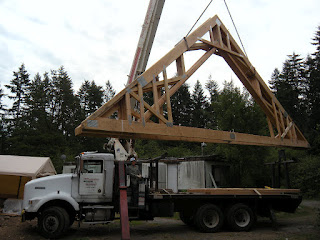 The delivery truck used a boom lift to set the bundled trusses on the top plate of the walls. 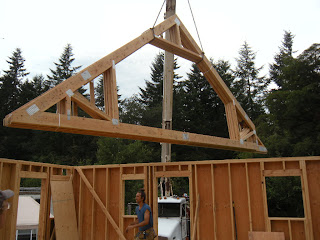 The delivery truck driver and boom operator was quite upset when he arrived because he had trouble finding us.  He later cooled down and apologized for his ornery demeanor.  We enjoyed his presence even with a little spit and vinegar. 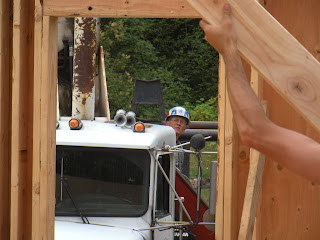 After the truss drop off, Wes and Shon moved the trusses into place, while I finished nailing off all the plywood sheeting. 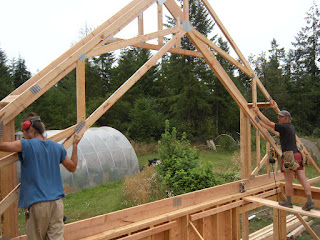 Here is a picture of setting the first truss in place. 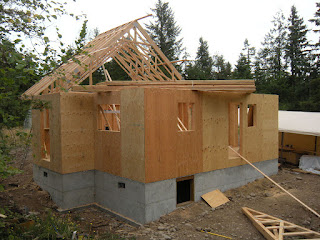 We ate lunch after getting the first half of the trusses set. 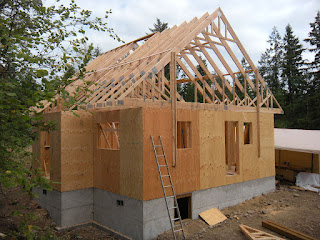 And called it a day after all the trusses were in place.
Posted by Pairoducks at 8:42 PM