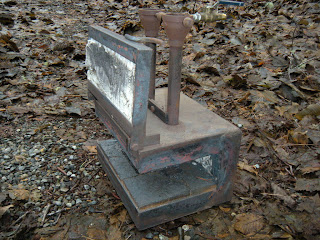 I have been working on constructing a propane forge for a few months. My ideas about the forge construction have been evolving as I learn more about working with propane. I was talking to my boss, blacksmith/welder/solar guru Don Moss about forge construction and he invited me to his house to check out how his forges. I really liked the design of this style forge and I decided to replicate the design. It's a two burner system with a c shape in the forge box. There is only one door and both sides are left open. Don says that he just covers the openings with fire brick if he needs to increase heat. The open c shape allows for much easier access with work. 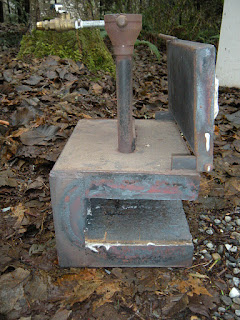 I really enjoy the simplicity of this forge and compact size. I had ideas of building a bigger box for the forge when I started, but I've quickly been realizing that allowing easy access to the burners is very important. More space in the box obstructs you from reaching the heat from the burners. You can also only work so much metal, so heating a larger area sometimes obstructs your grip on the piece. I've decided to go with a much smaller design thanks to Don's wisdom. 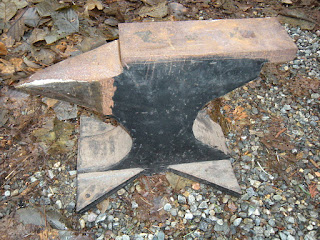 Don also had a home made anvil. Quite a story behind this tool. He scored the piece of t-1 steel from an industrial scrap yard. He cut the anvil shape with a cutting torch and he said he spent probably over 200 hours with a grinder shaping the horn. He welded a piece of s-7 steel as the face plate 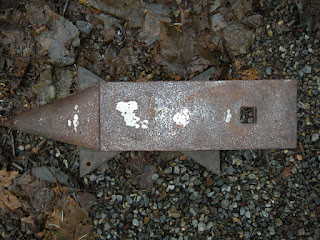 The best part of the story of this anvil is how he hardened it. Don used to live on Waldron Island, up in the San Juans. He built a forge on the beach with went logs and sand as the hearth. He piled on coke and had an exercise bike hooked up to a blower fan for the air supply. The bike had to be 25 feet back from the forge because of the heat. The anvil was placed on the center of the hot coals and when it eventually reached temperature, Don and a friend carried the anvil to the ocean using steel pipes and dropped it in to harden. He was not bashful when describing the steam cloud that erupted from the water.
Posted by Pairoducks at 9:28 PM