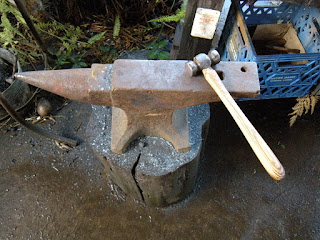 This week marked serious development in the efficiency of the process. Bill and partner Jen talked to me a bit about unconscious development on our mid day dog walk to the Blue Heron Bakery. While last week I was feeling like an utter failure, this week was significantly improved. I did nothing to prepare or study during the two week break, but my mind and body were much more in tune with the movements and process. I skeptically conclude that there is a lot of development that happens unconsciously. In the future, this will help me accept defeat, go for an adventure and return again with my mind and body properly focused for the desired result. I have similar experiences with mechanical conundrums, where a long walk and some stone throwing is the exact preparation needed to thread a nut on a bolt that is difficult to reach. Usually I do not think about adding time for a long walk and some rock skipping or puddle jumping when I am working on a project, but I'm rapidly realizing the necessity for proper mental health.

In this weeks blog entry I wanted to include some pictures of the Smithy (a traditional name for the blacksmith workshop). 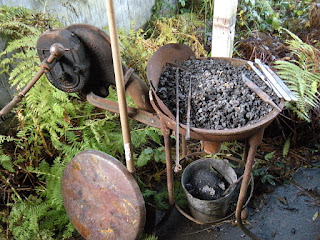 This is a picture of the coal forge we are working on. Coal has such a nostalgic feel; the smell, the sound, and the taste. It really connects one with the tradition of blacksmithing and mario time portals you to a different era. It's not just the skills I'm learning, but Bill is filled with gruesome and hilarious stories of Richard the Lionheart and William Marshall and their travails with tournaments where Richard made a name for himself. Interest in smithing opens up vibrant history and cultural traditions. Although most are quick to assume these traditions are archaic and out-dated, I'm not so sure that these skills are vastly surpassed and removed by the mechanized processes. 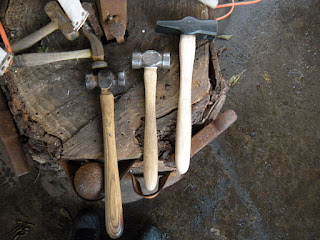 Here are some of the hammers we are using. The stories of each tool fill up my imagination with a rich history of how and why they were acquired. Bill got a bunch of tools including the hammer on the left and his anvil at an estate sale at an old sheep farm. He has re-handled it numerous times and he has settled on a handle design that has developed over the course of his career. He prefers a thinner, shorter handle with a rounded bottom that allows one to palm the bottom of the hammer. You can see that each hammer head is different, but the handles are all very similar. Once you find something that works well, it makes sense to replicate it and make most of the tools similar so that all you are altering is the hammer head, instead of having to adjust to the grip of each new tool.

The middle hammer is a rounding hammer made by Stumptown Forge in Portland, Oregon. Bill says that is rapidly becoming his favorite. I'm not sure the weight of this hammer, but it is not very heavy. When I first started I thought that heavier hammers would be utilized, but I'm learning that it is not the weight of the hammer or the force of the blows, but the rapidity and precision of the strikes. The faster the blows, the more thermal energy that is generated, the longer the heat of the piece you are working lasts and the more work that you can do during that heat . Sometimes watching Bill is reminds me of watching a woodpecker.

The hammer all the way on the right is a Sweedish style hammer and I have really enjoyed using this hammer for heavier stock. Bill just shaved down the handle, you can tell in the picture it isn't even oiled yet, and it makes a huge difference. Before my fingers barely reached around the handle, and now they wrap all the way around and allow for much more control. 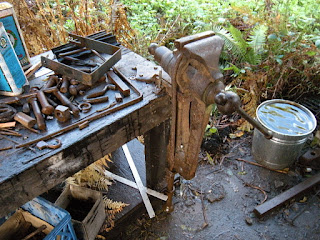 This is a post-leg vice, an essential tool for any smith. Click the link, but here is little an excerpt from anvilfire.com about the post-leg vice:

"Three things make a blacksmith's vice special. One is that they are forgings, not cast iron. The second is the leg which provides support to the floor or from a sunken post. The last is the hinge, while not a perfect way to construct a vice the pin joint is durable and can take a considerable beating. If sheared it is easy to replace. These things all combine into a tool that can take decades of heavy use and abuse. Most in use are one to two hundred years old." 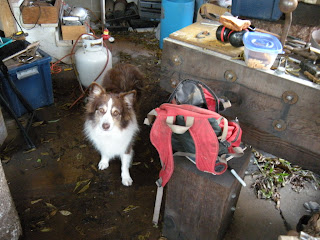 Willie Mae for a guest appearance in the Smithy. 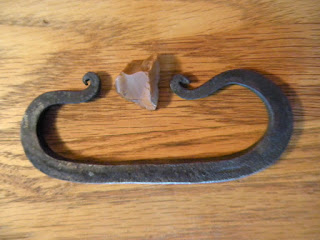 My project this week was a fire striker. This was made from an old file. I practiced squaring the stock, cutting it off, tapering each end of the work, scrolling and bending. These are all basic blacksmithing skills that are important in a vast plethora of projects. Pictured in the center of the striker is a piece of flint. 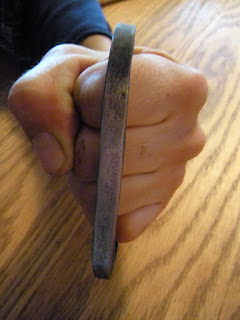 You hold the striker like so and hit the edge of the flint down on it to create sparks to start a fire. 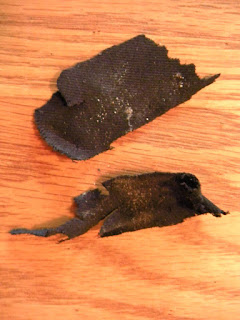 Bill also showed me how to make char-cloth. This is a piece of fabric (shirt weight or denim works great) that is charcoalized, so when a spark hits it, the char-cloth ignites and burns for several minutes so you can build a fire around it. The char-cloth above is made from denim. We put cut up pieces of denim in a aluminum cookie tin and pierced a tiny whole in the center and top of the can. While working on the forge we would move the can around, on top of the coals, until it smoked profusely, then pull it back off the coals. We put the can on it's side and upside down and repeated heating it until heavy smoke rolls out numerous times. It smells wonderful (thick sarcasm) and when you are waiting for your work to heat up you can ignite the gas pouring out of the top of the can. Kids are sure to love it and so will you!!

Email ThisBlogThis!Share to TwitterShare to FacebookShare to Pinterest
Labels: apprenticeship